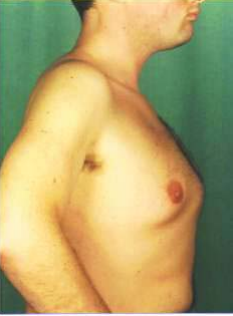 What Is Pectus Carinatum?

Pectus deformities occur in 1-8: 1000 population and are more frequent in boys than girls. In pectus carinatum (pigeon chest) the sternum is protruded in a convex shape. There may be asymmetry of the chest and the sternum may be rotated. The deformity varies in severity, ranging from a mild protrusion to severe. Most patients have a slim chest, a slouching posture and younger children commonly have potbellies.

The deformity is thought to be caused by excessive growth of the costal cartilages although the reason for this is unknown. This overgrowth causes the ribs and cartilages to ‘buckle’ and pushes the sternum either inwards or outwards. Musculoskeletal abnormalities that are associated with pectus deformities are scoliosis (lateral curvature of the spine), Marfan’s syndrome (an inheritable disorder of the connective tissue) and Poland’s syndrome.

Does The Deformity Become Better/Worse With Age?

The deformity is often noticeable at birth but becomes more apparent during the period of rapid skeletal growth in early adolescence. In one sample, 88% of patients stated their deformity was seen during the first few months of life (Fonkalsrud 2000). After the age of approximately 18 years of age the deformity remains the same. Gaining weight and chest hair (in men) usually reduces the appearance of the deformity.