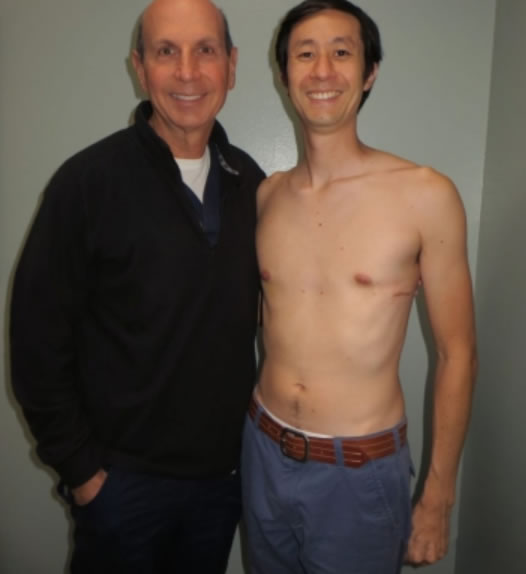 Sunken chest, also known as pectus excavatum, is a congenital condition that effects approximately one in about one of every 1,000 people. Mild cases are can be  just cosmetic, but severe cases restrict heart and lungs in addition to causing mental anguish.

Originally pioneered by Dr. Nuss in the 1990s, the Nuss Procedure was less invasive than previous techniques. Historically using the Nuss Procedure as an option for Pectus Excavatum surgery for adults  is less common because fully developed chests are less pliable.

Per an article originally published on KansasCity.com, “Dustin Lurvey is feeling pretty good for a guy with a steel bar inside him, pushing out his ribcage.

Before he had the bar surgically inserted a month ago, Lurvey lived 38 years with a dent in the middle of his chest that formed a funnel shape with the surrounding pectoral muscles. His sternum pressed against his inner organs, and when he exercised he struggled to breathe and could watch his heart beat through his skin.

Lurvey’s midsection is still tender from the surgery, and the bar will stay in for at least two years as his ribs, muscles and cartilage conform to their new shape. But his chest is now flat, and to Lurvey, that’s worth it.

“I’m doing better than I ever have,” he said. (article written by Andy Marso)

I’m very pleased with the results and would recommend Dr. Losasso to anyone.